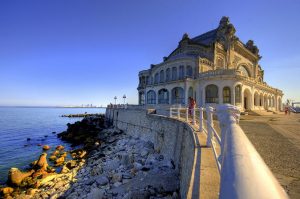 Balchik (Bulgarian: Балчик, Romanian: Balcic) is a Black Sea coastal town and seaside resort in the Southern Dobruja area of northeastern Bulgaria. It is located in Dobrich Province and is 42 km northeast of Varna. The town sprawls scenically along hilly terraces descending from the Dobruja plateau to the sea.

Founded as a Thracian settlement, it was later colonised by the Ionian ancient Greeks with the name Krounoi (renamed as Dionysopolis, after the discovery of a statue of Dionysus in the sea).[4] Later became a Greek-Byzantine and Bulgarian fortress. Under the Ottoman Empire, the town came to be known with its present name, which perhaps derived from a Gagauz word meaning „small town“.[5] Another opinion is that its actual name derived from that of a local noble – Balik.

After the liberation of Bulgaria in 1878, Balchik developed as centre of a rich agricultural region, wheat-exporting port, and district (okoliya) town, and later, as a major tourist destination with the beachfront resort of Albena to its south. The ethnic composition gradually changed from mostly Gagauz and Tatar/Turkish to predominantly Bulgarian. According to an estimate by Bulgarian historian Rayna Gavrilova the Bulgarian population before 1878 was only around 10%.[6] According to the latest 2011 census data, Balchik’s ethnic composition is the following

Loved this? Spread the word